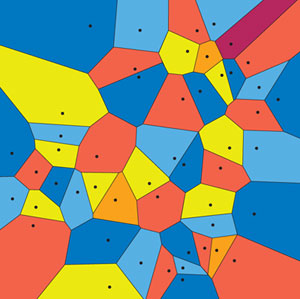 While asking myself what exactly it is nowadays that is not previously loaded with direct associations, I came across mathematical models. I feel that nowadays we live in a world built on science, thoughts and actions are legitimized by scientific findings to the point where science has more weight than ethical or intuitive knowledge. A model that stood out to me for its specific structure was the Voronoi tessselation named after Ukrainian mathematician Georgy Voronoy:

In a Voronoi pattern, every point within a given region is closer to the “seed” inside that region than it is to any other point outside that region. Each point along a region’s edge is equidistant from the two nearest seeds. It’s seen in places ranging from cracked mud to giraffe skin to foamy bubbles. Voronoi patterns can help solve geometric problems like packing, strategic placements  and patterns of growth.